As a parent and a counselor for children, one of my biggest fears as my oldest entered kindergarten this year was that she would encounter the dreaded “bully”.  Growing up, we have all experienced that child, but somehow, it’s different when it’s your child preparing to enter a world that you have very little power or influence over.  Unfortunately, my precious girl inherited my qualities of being very caring and compassionate coupled with extreme sensitivity.  I am definitely experiencing a taste of what my mom felt raising a sensitive kiddo.  While these are wonderful qualities, they can make dealing with a “bully” that much more challenging.  My husband on the other hand has always been remarkably unbullyable.  Negativity and the harsh judgment from others do not faze him and never really have.  As you might imagine, this absolutely baffles my mind.  I kept thinking there must be something to it, some method or way of teaching what is so incredibly innate in him.  Turns out, there is!  And it can work for grownups too.  So, it’s not too late for anyone.

In my research of the word, “unbullyable” I stumbled upon Sue Anderson and her brilliant work.  She is a speaker, trainer, coach, and author located in Australia.  She wrote a book of the same name, “Unbullyable”.  She originally began helping children who had experienced bullying at school through coaching.  This eventually 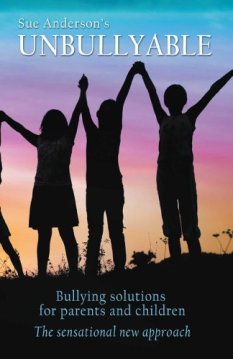 translated into her work with helping the bully to improve relationship functioning, emotion regulation, and behaviors.  It helps to start with the source and I wish there were more local programs that focused on this side of the work.

My absolute favorite takeaway from Ms. Anderson’s work is what she calls, The “Four Powers”.  These powers enable a child to reclaim control of his or her thoughts, feelings, actions, and words specifically with regard to bullies.  This translates so beautifully into how we would like our children to approach life in general.  I love how she describes helping the child “stubbornly refuse to be affected by bullying attempts toward them”.  Ms. Anderson describes the “Four Powers” as follows:

“We have the ability to control what we think, how we feel, what we say and what we do”.  This mindset helps the child feel a sense of power and control.  Both words are generally associated more with the bully than the individual on the other end.  Long term benefits of individuals using this method involve strategies similar to mindfulness training and neuro-semantics.

Remove the power unbalance:  We all tend to view those that bully others as being in a position of power over the chosen target.  This is really actually a perception of power based upon physical size, socioeconomic status, popularity, or role. Now there are times when this is absolutely the case as in workplace bullying by a supervisor or boss.  Most of the time however, it is someone who may be the exact same age/grade with no authority whatsoever over the target.

Decrease blaming and increase acceptance of responsibility: By taking control of our “Four Powers” we take out of the equation the tendency or desire to blame someone else.  This is helpful in assisting the child with becoming the “unbullyable” one because they are focusing more on what is theirs to manage vs. what someone else has done or not done to them.

After learning about this approach to bullies, I couldn’t help but think about super heroes and their special powers and abilities.  So, that is how I now approach that dialogue with my daughter and my clients.  I encourage them to picture themselves as super heroes with super powers.   I even recommend that they draw themselves as the superhero with their special ability being the “Four Powers”.  It is so empowering, I mean who doesn’t want to picture themselves as a powerful super hero in the face of adversity.  Adults too can benefit from being intentional about using their personal powers to take back control from individual who is attempting to take it away.  What we think, what we feel, what we do, and what we say are powers that someone can only take away if we allow them to.

The Power to Choose What You Think YouTube video:  https://www.youtube.com/watch?v=yskMbKypyqA

This may be my most favorite one yet.
HAPPY MONDAY!
Yes. We Will.

HOW TO FIND THE RIGHT THERAPIST FOR YOU

Written by: Amy Bryant I will never forget the first time I went to therapy. I was going through a divorce and desperately trying to save my marriage. I cannot remember why or how we ended up with the therapist that we did but I did not do any research beforehand. I simply followed blindly […]

Back to School Basics: Setting the Stage for a Great Schoolyear

It seems like every year the summer season gets shorter and shorter, and before you know it autumn hits (or what passes for autumn in Texas). For many adults this shift doesn’t significantly affect their day-to-day routine. However, for children this change is often huge. Gone are days filled with camps and vacations (or if […]

Parent Self-Care 101: Trust me, your kids will thank you

Written by: Kate Hill Parenting isn’t for the faint of heart: it requires a high demand on time, energy, and attention in caring for the kids and the family. Unfortunately, this usually means that parents’ own needs will take a backseat and are quite often neglected. When parents stop caring for themselves, stress can cause […]