“You wake up in a forest clearing. You have no memory of how you got there. As you sit up and look around, you see three other individuals who also seem just as clueless and dazed as you. You reach down to your belt, but you realize your sword is gone. In fact, neither you nor your companions seem to have any weapons of any kind. In the middle of the clearing, you notice a wooden chest with a large lock. What do you do next?”

I know what you’re thinking. Dungeons and Dragons? That’s a board game, isn’t it? How does rolling dice and pretending to fight monsters help with managing stress or improving relationships? You may be surprised to learn that Dungeons and Dragons (or “D&D” for short) can be used as a therapeutic tool and outlet for a variety of domains, including communication, problem-solving, assertiveness, emotion management, handling unpredictability, and perspective-taking. How, you may ask? Well, it’s more than just magic…

But first, a little history!

Dungeons and Dragons was created in 1974 by Gary Gygax and Dave Arneson. Back in the day, it was restricted to a mail-order instruction pamphlet and a set of dice. While the game increased modestly in popularity during the 1980s and 1990s, it did not hit the mainstream until it slipped into popular shows such as Futurama, Big Bang Theory, and, most recently, Netflix’s smash hit series, Stranger Things. As of 2018, the developers of D&D reported record sales, which are only projected to increase over the coming years. Celebrities such as Dwayne “the Rock” Johnson, Vin Diesel, Ben Affleck, Matt Damon, John C. Reilly, Tim Duncan, Jon Favreau, Jon Stewart, Stephen Colbert, Drew Barrymore, Aubrey Plaza, Anderson Cooper, Mike Meyers, and even the late Robin Williams have all professed their love for the game. More than ever, players young and old are exploring dungeons and slaying dragons through this open-ended game of shared storytelling.

But what sets D&D apart from other games? And, more importantly, what makes it a useful tool in therapy?

D&D requires imagination or “theater of the mind.”

Dungeons and Dragons isn’t like your typical board game. While you can use maps, figurines, and other accessories to enhance your playing experience, these aspects are all optional and not required. In truth, all you really need is a sheet of paper, something to write with, and a set of dice (In fact, these days, you might not even need the dice! There’s an app you can download on most major smartphone devices that will simulate dice for you). The players can create their characters based on a variety of choices. They select their race, class, alignment, and even personality traits. It is fully customizable, and the only limits are the players’ imaginations.

The dungeon master (or “DM” for short) sets the stage by providing a variety of settings, scenarios, and encounters for the players to navigate. The DM will offer an assortment of choices, and it is up to the players to negotiate with one another to decide what they want to do and how they want to do it. But the true magic of this process involves the storytelling aspects of the game. It is up to the DM to describe the environment in as much detail as possible – from the bumps of the cobblestone streets, to the smell of smoke wafting through the air, to the sounds of swords clashing in the distance. Likewise, it is up to the players to describe how they react. This encourages players to be playful, creative, fun, and flexible with their choices. D&D enables players to travel to faraway lands, face fantastical foes, and accomplish amazing feats, all without having to leave the comfort of air conditioning!

D&D allows for exploration in a safe space.

Roleplay and imaginative exercises are common tools in “traditional” therapy. By working through an imagined problem, it provides an opportunity to practice desired skills in a safe environment without fear of certain consequences. The same is true for Dungeons and Dragons. Playing D&D lets players try out things that may be hard for them to accomplish in the real world.

Say, for example, you want to be better at asserting yourself to bullies. In the real world, there may be consequences to this, and it may be a little too scary. In Dungeons and Dragons, on the other hand, the Dungeon Master can provide opportunities for players to stand up for themselves without the fear of real retaliation. Players can practice using a clear and strong voice, concisely communicating their needs, and standing their ground against monsters. Players will also have opportunities to pause and consult resources, whether that’s a guidebook, a magic item granted by the DM, or even fellow players. By gaining this imagined exposure to scary situations, players may feel empowered when they encounter similar situations in real life.

D&D isn’t about winning or losing – it’s about teamwork!

Dungeons and Dragons isn’t like traditional games in the sense that you are competing with other players to be the best. Quite the opposite, actually! Success in D&D comes from relying on your fellow players and learning how to cooperate with them. This may be a little difficult at first, especially as players are getting to know one another through their characters. The DM can facilitate communication by asking questions, inviting players to share, and pressing “pause” on interactions to process conflicts and promote interpersonal awareness. Each character has different abilities that are learned and used by working together. Team-building is the name of the game.

In a sense, therapeutic D&D can be similar to group therapy. It consists of people dealing with similar problems who are sitting together and supporting one another. Only by utilizing key social skills like compromising, perspective-taking, and conflict resolution can the players hope to move forward in the story. It’s about being present in the moment and accomplishing goals and tasks through togetherness and, ultimately, fun!

Dungeons and Dragons may be about fun and games, but it can also tackle tough themes. The Dungeon Master can choose to incorporate all kinds of heavy subject matter as a way to expose the players to new ways of thinking. Because D&D is purely imaginary, it is an ideal space to confront complex and uncomfortable emotions. Sadness, loss, loneliness, and even trauma can be explored through characters’ backstories or interactions created by the DM. In fact, these techniques have been used to help specific populations, such as veterans who are coping with post-traumatic stress disorder, or individuals diagnosed with Autism Spectrum Disorder who feel deeply isolated from others.

One example from one of my previous D&D games involved a character finding out that his father had been killed in battle. The players (and the characters) had tackle the feelings of outrage, disbelief, anger, and grief in real-time. Although the loss was pretend, it was clear the player was deeply impacted by these emotions. It was also a powerful and moving experience to see how the characters comforted one another and helped them move through the mourning process. Through these experiences, players are able to learn how to navigate painful encounters, while perhaps even processing their own painful pasts.

D&D leads to greater understanding about yourself.

Ultimately, D&D gives players an opportunity to explore new aspects of identity – who you are, who you wish you could be, your strengths and weaknesses, your hopes and fears. Pretending allows us to escape in a way that facilitates learning something new – about your friends and about yourself. Aspects of real life inevitably begin to emerge in the game, and it is up to the DM to process these experiences in a therapeutic way. Players can place pieces of themselves in their characters, or they can create someone completely different than who they are in real life. Either way, D&D gives the players a chance to try new things and discover new facets of their identity. Sometimes it takes becoming a hero in a game to feel strong enough to become the hero of your own story. 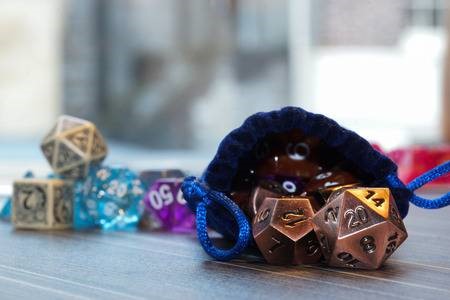 If you are interested in learning more about Dungeons and Dragons, as well as how it can be used therapeutically, check out these links:

A New Look at Resolutions

By: Daniel Mark, M.S Habit is habit, and not to be flung out the window by any man, but coaxed downstairs a step at a time. – Mark Twain Many people chose to make New Year’s resolutions, such as lose weight, eat better, quit smoking, watch less TV, exercise more, be kinder, save money, etc. […]

The Power of Gratitude

By: Bailey McAdams, M.ED., LPC Signs, Symptoms, and Strategies As this school year kicked off, I am reminded that never before in the 15 years I have been a counselor, have I seen so many stressed out kids.  I am currently seeing more and more children and adolescents with symptoms of anxiety and depression related […]